The Big Five: The Beauty of Africa’s Most Iconic Animals 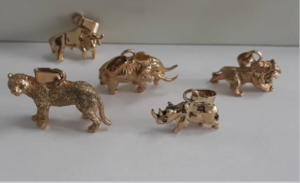 The ultimate thrill is to understand the Big Five Artefacts/Pendants

Many people go on safaris in African countries, in our case Zimbabwe/ ‘Zimboo’ to spot and take pictures of “The Big Five” animals. But Mikel Cole, in 2017, all the way from Canada, was the first person to conceptualise the enjoyable safari game drive he had in the majestic city of Victoria Falls. He did so by buying a complete big five set of pendants from Aurex jewellery Victoria Falls shop. I was very patient and obliging in giving an in-depth interesting, informative briefing about the animals.

Where does the name come from?

“The Big Five” is a synonym for these animals: the lion, the leopard, the elephant, the rhino and the buffalo.

It is an ancient hunting term used by big game hunters which has nothing to do with the physical size of the five animals. It has to do with the level of difficulty and the danger involved in hunting these animals.

Deriving jewellery designs from the animals

Today, the term is also used in conjunction with jewellery designs. The Big Five are very different animals, but all of them are high on the list of people’s must-see in Africa. Hence jewellery manufacturers, the likes of Aurex Jewellery, came up with the Big Five artefacts or pendants on both gold and silver to close the gap for those who want to keep moments they experienced. Some people fulfil their beliefs with the animal pendants that represent their totems. 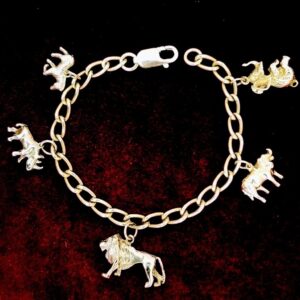 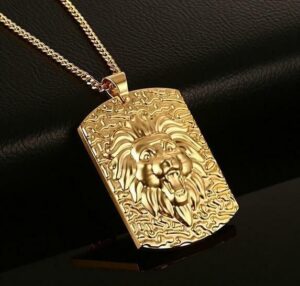 Victoria Falls is our biggest catchment for international clients who mostly do not want to go back to their respective countries without the Afro-Centric products from Aurex Jewellery. It is our greatest pleasure to expertly manufacture the best jewellery, with an African touch, both for domestic and international markets.

King of the jungle. It symbolizes an array of noble characteristics such as loyalty, courage, strength and pride. IT’s female counterpart – the lioness – represents fierce motherhood and femininity.

A  symbol for courage, agility, and ferocity. The leopard is highly revered in African cultures as an outstanding hunter due to it’s stealth and mystery.

While they seem aggressive on the outside, rhinos have been known to be calm, peaceful and quiet. They exude inner peace. The rhinos aggression contradicts its peaceful nature.

It’s confrontational nature, especially in solitary bulls represents courage and the willingness to never back away from a challenge.

And why is “The Big Five” such a special thing to experience?

The term ‘Big Five’ today portrays the beauty and power of some of Africa’s most iconic animals. This characteristic greatly contributes to the idea that they are indeed imbued with courage and bravery.

In a nutshell, Aurex jewellery as a centre of excellence in jewellery making, has a variety collection of wedding jewellery and fashion jewellery. Holding all other things constant, the Big Five Animals/Pendants are amongst the best in the continent to carry the African symbols across the globe, so a well-crafted genuine gold or silver big five pendants from Aurex jewellery keeps the Zimboo flag flying high.

You can shop for gold and silver pendants here https://aurex.co.zw/fashion-jewellery/pendants/

The Cold War Between Customers and Salespeople
July 21, 2021