When life gives you lemons…

Sometimes life gives us lemons and at times it is as sweet as honey. We face good and bad times every now and then. In it all, we must focus on the positive side to remain sane. We are lucky to have been given the will to choose because most times, life is what we choose to make it. Although some things hit us unexpectedly, but it is what it is.

“Over and over, again and again
through it all He’s made me able
To stand and survive, to come through alive
When it sure looked like l couldn’t win
Jesus is with me, so l claim the victory
Over and over again”

Ronald set on the edge of the bed looking at the ceiling with eyes wide open, he looked like a zombie. The song played softly in the background, and it had been repeating over and over like its chorus said. Ronald was buried deep in thought, not realising he had been in the same position for nearly twenty minutes without flinching or blinking an eye.

He finally came to his senses when he felt tears rolling down his eyes. The song in the background had slowly but surely become imprinted in his mind as he found himself singing along to it.

It dawned on him that he had survived two accidents, buried six family members, some of whom had succumbed to Covid. The dark cloud had surely been following the Madzore family, but it had missed him. He was thankful for the gift of life but at the same time hurting inside.

Bhudhi Ronny! Bhudhi Ronny! He stood up quickly at the sound of his sister calling, and almost fell face down due to a dizzy spell. He walked slowly to the door. When he opened it, he was greeted by an aroma of food, and he knew Jessy had prepared lunch.

As he went down the stairs, he saw his sister’s skeletal figure standing by the table waiting for him. Jessy had lost a lot of weight probably due to all the misfortunes in the family. The accident that took their parents’ lives had hit her hard and the bright smile that always lit the room had disappeared. The bubbliness and cheerfulness seemed to have been left at the graveyard on the day of their parents’ burial.

Her health had also deteriorated as she was constantly suffering from colds and headaches. This worried Ronald even more and he knew he had to do something for her to move on from her melancholy. He could only think of her approaching birthday and decided to gift her with something special.

On the day of the birthday party Ronald stood to give a speech while presenting a present of a portrait and a gold chain with a tree of life pendant on it, to Jessy.

“My sister, l know, and also feel the pain that you’ve been suffering following the tragedies in our family recently. The loss of our parents all at once was the worst to ever befall us. However, we must keep living positively.”

“Life is like a tree; the mother tree might be chopped down but the seed that fall on the ground must regrow and bear fruit. The cycle goes on. We both must remain positive and optimistic to continue our family tree. We cannot give up now, but we should live vibrantly to strive and bring forth seed.”

“Hang this portrait in your room, so when you wake up each morning, you remember that the tree must bear good fruit, for we are now the trees, and we must continue the family tree of life. Hang this golden tree of life l bought at Aurex Jewellery, around your neck so that this reminder is with you always wherever you are”.

By the time Ronald finished his speech, tears were already streaming down Jessy’s triangular face. For the first time since the past year, she felt a load being lifted from her once heavy heart. She cried and smiled at the same time with mixed emotions. 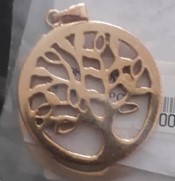 The Journal of a Jewellery Sales Consultant
November 9, 2022

Jewellery
Go to Top
We use cookies to ensure that we give you the best experience on our website. If you continue to use this site we will assume that you are happy with it.Ok