It was on a cold, calm day and Nomzamo was feeling ecstatic to be meeting her old best friend whom she had last seen five years ago on their graduation day. They had gradually lost touch due to long distance and their busy lifestyles, Nomzamo thought. However, amidst the excitement there was some gloominess that kept creeping at the back of her mind. She had never been able to forgive herself for what she had done to her best friend Emma six years ago while they were still at college. Emma never knew that it was her best friend that had stabbed her at the back.

The golden necklace that had managed to put a drift between Emma and her now husband had disappeared without a trace. The “golden couple” as they were referred to in those days, had fought over the necklace to a point where they broke off their relationship. Jealousy, truly an ugly beast, had caused Nomzamo to hide away the expensive 18 karat necklace which Tinashe had given to Emma as a symbol of their everlasting love. They had searched for it to no avail. Tinashe had accused Emma of being careless and inconsiderate of his efforts. The two had had a blown-out argument which led to their sad parting.

However, after graduation they had reached out to each other and rekindled the flame of love, leading to their marriage. Nomzamo had not managed to attend the wedding. At the time she had encountered misfortunes of losing her uncle and grandmother in a horrific accident which had claimed three other victims.

Nomzamo sat across Emma at their favourite spot at the Haefelis deli at Fife street in Bulawayo. “You look amazing!” Emma exclaimed to Nomzamo, who reciprocated by saying “girl shut up, you look better than me!” The two exchanged pleasantries as they started catching up then suddenly Nomzamo’s eye caught the necklace on Emma’s neck and froze. Emma was astounded and asked Nomzamo what it was, then Nomzamo uttered “your necklace!”.

Emma exclaimed “Oh, l know right! It looks exactly like the first one that got lost at college. We had another one made exactly like the last one for the wedding, only this time we asked that they add an infinity pendant on it. l have guarded this one with my life especially after what happened with the first. I never thought me and Tinashe were going to cross paths again, but when we did, the chemistry was even much stronger. Fate just would not allow us to stay apart. We are soulmates”. “Wooow!” Nomzamo exclaimed, with a smile the size of Mount Kilimanjaro on her face and congratulated her friend for marrying the love of her life. 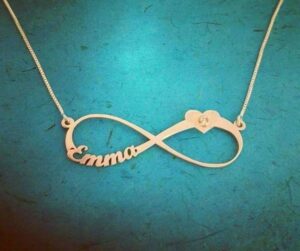 Nomzamo thought of the necklace back in her jewellery box at home. She felt her stomach tighten with guilt and shame. 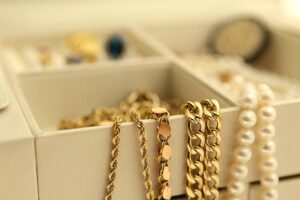 She had to get rid of it or come clean to her friend, but she was afraid of losing their friendship. Emma was her only best friend and the thought of losing her made her want to scream with anger at her own foolishness.

When, finally, Nomzamo was home alone, she took out the customized 18k necklace and realised that it was still very shiny as it was the day she first saw it on Emma’s neck. She then took out an Aurex Chain box that she had received when she bought her own 5 karat gold chain weeks ago and placed Emma’s chain inside. She remembered how the saleslady had told her that all their jewellery were hallmarked and decided to check if Emma’s necklace was also hallmarked.

To her surprise the chain was hallmarked with the letters ‘AUX’ meaning it had been bought from Aurex Jewellery too! She was astonished and realised how much Tinashe must have sacrificed to purchase the chain. She felt her knees buckle and right there decided to give it back to the rightful owner.

The long dreary moment came for Nomzamo to come clean or forever hold her peace. She stood with her head bowed down like a child who has just been scolded. Emma asked her what was wrong several times before Nomzamo could finally kneel in front of her and start asking for forgiveness. She slowly took out the chain box from her handbag and handed it to Emma. Nomzamo told Emma she was sorry for ever stealing her necklace. 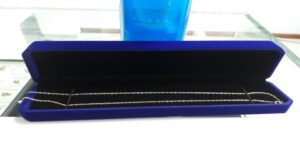 “But why Nomzamo?” Emma asked. With her head bowed down in shame, Nomzamo told Emma that it was jealousy and that she wasn’t thinking straight. She told her how she had never been at peace knowing she could have broken her relationship with Tinashe forever. Nomzamo begged for forgiveness relentlessly until Emma felt pity for her friend. She was astounded and asked Nomzamo to stand up from kneeling. Emma gave her a warm hug and forgave her.

Nomzamo felt relieved, a heavy load had been lifted from her heart. She felt at peace knowing she had given back what never belonged to her in the first place. Nomzamo was even more thankful knowing she was forgiven. However, she felt she still owed the couple a bigger gesture to show how sorry she was. She vowed in her heart to never take what does not belong to her.

Emma was disappointed but again she was happy that the long-lost chain was always safe after all. It still looked as good as she last saw it. It was timeless jewellery indeed. She just couldn’t wait to show her husband their first Aurex Jewellery chain that was still brand new. The chain was a link in their relationship, it separated and brought them back together again. 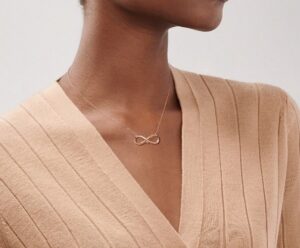 You too can customize your chain like Emma. Simply pick a font style of your choice and we will design your necklace for you. Trust Aurex for all your Genuine Timeless jewellery.